In presenting the award FBA's Becky Alfonso made the following comments:
﻿
"Deputy Mayor Peter O’Flinn has demonstrated his outstanding leadership both in the City and throughout SWFL to advocate for complete streets as the best way to realize the City's vision of human-scale development and quality of life. He made this issue his #1 priority. As a result of these efforts, Bonita Springs received national recognition (by Smart Growth America) as one of the12 communities in the United States for its exemplary work on implementing complete streets.

Peter has led the effort to educate the public about the value of roundabouts and road diets, which has been critical to bringing these changes to SWFL.  Equally important, since he was elected he has been committed to bringing to reality a rails-to-trails trail to connect Bonita Springs and Estero (10 miles) and make it part of the statewide network, with a vision of how to take these two cities to the next level.

It is my honor to present Bonita Springs Deputy Mayor Peter O’Flinn our 2018 Elected Official Champion of the Year award."
In receiving the award, Deputy O'Flinn said he was part of a team effort, highlighting the contributions of outstanding staff--City Manager Arlene Hunter and Deputy City Manager Matt Feeney--along with Councilman Mike Gibson who has worked on these issues for many years and is the Council's liaison to the City's Bike/Ped Advisory Committee.

*The Florida Bicycle Association (FBA) is a membership-based 501c3 non-profit whose mission is bicycling education and promotion of smart cycling. FBA is not a bicycle club - we are and always will be people, businesses, organizations and communities working together to build a bicycle-friendly Florida to benefit all. 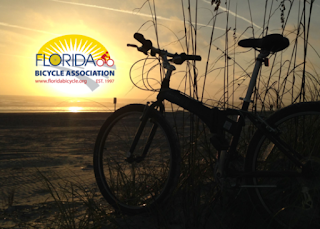 To see the full list of the recipients of FBA's 2018 Annual Awards, click here.
Congratulations to all the award recipients!