It's exciting to see momentum building for the Southwest Coast Connector trail that's part of plans for a Florida statewide connected trail system.
The News-Press feature article has several components, including a piece on the economic benefits of trails and a video that highlights the vision.  Thanks to Laura Ruane of News-Press for the great coverage. See links to previous BWL blogs on topic at end of this post. [Note: Photos in blog are not the ones in the News-Press article.]

Picture a 300-mile ribbon of pavement for walking, running, bicycling or skating that stretches from Clearwater through Naples.

It runs past scenic waterfronts, bucolic landscapes and lively downtowns.

That’s the dream for The Gulf Coast Trail, known by some as the Southwest Coast Connector.

Its proponents say the trail will be a boon for bicycle-pedestrian tourism, and in some spots also serve commuting workers and schoolchildren.

“There was no need for me to have a driver’s license until I moved to Florida,” said Hitchcock, a transplant from Denver who owns and operates the Ancient Art Tattoo Studio in North Fort Myers.

That was nearly 25 years ago. Today, Hitchcock doesn’t think she would commute to work on the trail, but envisions long weekends or even a weeklong vacation “riding 30 or so miles a day” on her bicycle, seeing some of the region’s best beaches, wooded areas and downtowns. 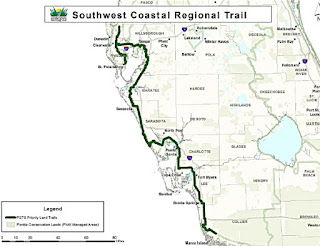 Not for recreation only

But there’s much work to be done. The Gulf Coast Trail is a network of existing paved segments with numerous gaps to fill, and routing decisions yet to be made.

The good news is that Southwest Florida counties are uniting behind the concept – and substantial new state funding has started to roll in for bike-ped trail development across the Sunshine State.

Why the push for major, named regional trail networks?

With some noteworthy exceptions – New York City’s famous 1.8-mile High Line among them – long trail networks get more bang for their buck than individual, short trails.

Florida Greenways and Trails Foundation says when a trail is 150 miles or longer, that trail becomes a national and international destination, pumping up the overnight stays and economic benefits.

Historically, bike-ped trail-building in the Sunshine State has been sporadic, with city and county governments scraping up what they could, competing with each other for state and federal grants.

The money comes from a portion of the fees drivers pay for new motor vehicle license tags.

The Florida Greenways and Trails Council recommends priorities for links in the system.

The remaining third of SUN Trail funds is designated for helping to fill gaps in other major trails.

Gulf Coast Trail proponents hope to qualify for dollars in that third spot, and ultimately move up in priority as the Coast-to-Coast Trail is substantially completed.

But they aren’t waiting for that to occur.

These planners and other bike-ped facility experts and enthusiasts met in Venice on Jan. 23 for a trail summit organized by the Tampa Bay Area Regional Transportation Authority.

In Collier County, the MPO will continue to collaborate with other agencies on completing the trail, said Eric Ortman, senior planner.

"There are financial challenges. Extending the Richard King Greenway may be a next logical step in the process," Ortman said.

The Richard King Greenway connects Radio Road and Rattlesnake Hammock Road, and is used by some work commuters as well as recreational walkers and bicyclists.

Lee County's MPO is seeking the Florida Greenways and Trails Council's endorsement for a coastal loop detour from the mostly inland trail route which would lead to Fort Myers Beach and Bonita Springs.

The detour would pass by Lovers Key State Park, with one version also skirting Estero Bay State Preserve State Park and its lakes.

Portions of the detour, though, would have limited separation from busy beachfront Estero Boulevard, which is undergoing a county-funded bike, pedestrian and transit enhancement.

The Estero Boulevard improvement project already underway will build or include existing sidewalks anywhere from 8 feet to 9 1/2 feet wide in those sections of the boulevard where constrained rights-of-way won't allow bike lanes or would permit only sharrows. The latter are those shared road markings, often with a picture of a bike, reminding motorists that cyclists have a right to use regular road lanes.

That's OK with food safety manager Linda Anders, recreational cyclist who prefers trails to roads – even those with bike lanes.

Anders likes the idea of the Gulf Coast Trail  despite the likelihood some stretches will be on or near busy roads.

“Because it will be a designated trail, people will use it more often," Anders said. "And drivers will understand there will be bicyclists on it.”

It all comes with a cost. Lee County MPO estimates that total needs, including the coastal loop alternative, will cost nearly $36.5 million.

Considering the cost and complexity of acquiring rights of way, designing and building bike-ped trails, will gaps remain in Lee County's share of the Gulf Coast Trail 20 years from now?

“There might be,” the MPO’s Scott said. However, he thinks progress in some areas can be made in five years or less. That might be establishing a new link from the northern end of the John Yarbrough Linear Park Trail to Hanson Street.

Still to be answered are questions such as how the Gulf Coast Trail would flow through downtown Fort Myers and cross the Caloosahatchee River into North Fort Myers.

These kinds of challenges were summarized at  the Venice bike-ped trail summit in January. It drew a crowd of close to 200 people – easily three times the number organizers initially expected.

Lee Health also has pledged $2,500 seed money for a video that would acquaint people with the Gulf Coast Trail's benefits and what it might look like.

The hospital system will host a meeting of Florida Greenways and Trails Foundation at Cape Coral Hospital in May.

Lee Health supports the Gulf Coast Trail because “being able to safely move about, outside of our automobiles would be a huge benefit to our health, to our lifestyle and to our economy,” said Christin Collins, who helps the hospital system plan wellness programs for its staff and the community at large.

In January, the National Complete Street’s Coalition released its “Dangerous by Design” report naming Lee County as the most dangerous place in the nation for pedestrians.

Collins called the report “a gift.” Asked to elaborate, she said:

“If we don’t know about the problem, we won’t take time to educate ourselves and work for change.”

Generally, the longer a bike-ped trail, the likelier it has significant economic impact.

One happy exception to this is New York City’s High Line, a 1.8-mile linear park and bike-ped trail built on a defunct elevated freight line.

*$2 billion in new economic activity; and

*Soaring property values:. One block from High Line, values doubled, with the rest of downtown Manhattan increasing by 75 percent.

In Florida, one of the biggest bike-ped trail successes hinged on a single county's initiative: “Penny for Pinellas” is an additional 1 percent sales tax voters in that county approved more than 20 years ago.

It was a major funder for the 47-mile Fred Marquis Pinellas Trail that was built along a former railroad corridor, and which gets more than one million visitors yearly.

The Legacy Trail in Sarasota County is an up-and-comer that would be part of the Gulf Coast Trail network. It’s a $40 million investment to date that’s been paid for primarily through a variety of local taxes.

The trail stretches from the city’s historic train depot near its downtown, runs north more than 10 miles, and passes Oscar Scherer State Park, before ending at Culverhouse Nature Park.

However, a 7.5-mile extension to Payne Park in the heart of downtown Sarasota is a long-term goal that's getting tantalizingly closer.

In a recent newsletter, Friends of Legacy Trail said it’s learned the owner of the rail corridor intends to sell it to a public land trust that would then transfer the title to Sarasota County.

About 175,000 people use  the trail yearly, according to a recent study by Friends of Legacy Trail.

“That’s pretty amazing given that the trail does not yet link the two major population centers in the county: the cities of North Port and Sarasota,” said Roger Normand, who speaks for the friends group.

Things are improving for cyclists and pedestrians in Florida, but danger abounds. The Cape Coral-Fort Myers metropolitan area was recently named the deadliest in the nation for pedestrians. However, that study didn’t include improvements over the past two years. For example, a local initiative called the Bike-Ped Master Plan for Cape Coral should help make conditions safer for pedestrians and other non-motorists. A new grant is paving the way for 7 miles of improvements primarily along Kismet Parkway in the Cape.