Congratulations to the Sanibel City Council for joining the "3 feet please" campaign. A big thank you to the Sanibel Bicycle Club for recommending and advocating for this action to improve the safety of cyclists on Sanibel roadways.

At the Dec. 6, 2016 Sanibel City Council approved the Sanibel Bicycle Club's request that the City place "3 feet please, it's the law" decals on all Sanibel city vehicles.  Sanibel joins other area communities and agencies in the campaign to raise motorists' awareness of Florida law requiring drivers to give at least 3 feet of clearance when passing a bicyclist on a roadway. 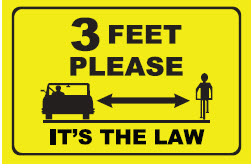 The "3 feet please--it's the law" campaign has been underway in SWFL since 2010, resulting in Lee County government, LeeTran, Lee County Sheriff's office, the cities of Naples, Punta Gorda, Tampa, and now Sanibel, placing these decals on their police and other government vehicles.  [See BWL's 2013 column about the initiative. ] Discussions are underway in both the cities of Cape Coral and Fort Myers to follow suit.  In addition, the Sanibel Bicycle Club, BikeWalkLee, SWFL Critical Mass, and bike shops, including Billy's Bikes and Bike Bistro, have been distributing these decals to cyclists and citizens for placement on their vehicles. [See BikeWalkLee's Jan. 17, 2016 blog story: "Promote the "3 Feet Please--it's the law" bike safety campaign.]

In addition, Sanibel's  November 2015 "Shared Use Pathway Intersection Safety Report" by TY Lin International consultants (a study undertaken in 2014 by the City of Sanibel at Council's request), recommended that the City, as part of its community education program, place these bumper stickers on City vehicles to remind motorists of their obligations to cyclists on the roadways.

In comments submitted by the Sanibel Bicycle Club to the Sanibel City Council in support of this proposal, it stated that "Bike Club members are aware of many instances on Sanibel where this law was violated, apparently in deliberate efforts to convince cyclists to move to the shared use path, even though cyclists have the legal right to operate on the roads.  Such acts have placed cyclists in physical danger."

Mayor Ruane also brought to the Council's attention that these "3 feet please" decals were on the 3 cruisers that Lee County Sheriff's Office recently loaned to the City of Sanibel after the on-island police shooting incident. The Council voted 4-1 to direct the city staff to place these decals on city vehicles. 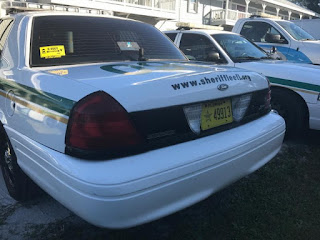 Kudos to Mayor Ruane and City Council members for their support.  A big "thank you" also goes to the Sanibel Bicycle Club for recommending and advocating for this initiative as part of its ongoing bike/ped safety campaign.

If you want to join the "3 feet please--it's the law" campaign by putting a decal on your car, contact one of the organizations mentioned above that are distributing the decals; or place your own order for decals directly.  [See instructions in the Jan.17th BWL blog post.]
Report by Darla Letourneau