Kudos to law enforcement for its continuing bike/ped safety awareness campaign.  A special thanks to News-Press for their extensive coverage, and to BWL's Dan Moser for being part of this effort. 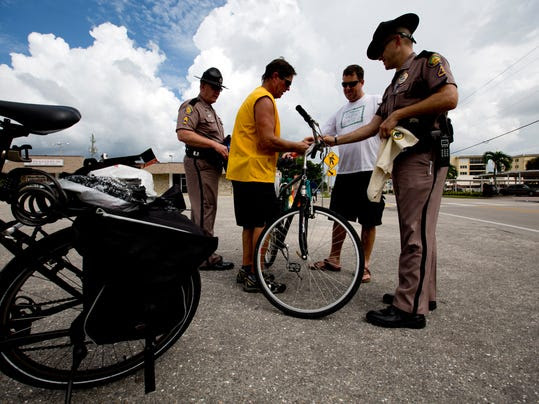 Dan Moser, center left, , an EMS injury prevention outreach worker for pedestrians and bikers attaches a light to Fort Myers Beach resident John Luttrell's , center right, bike with the help of Florida Highway Patrol trooper, John Schultz, right, and Dwayne Cooper, left onFort Myers Beach Wednesday 9/24/2014. The Florida Highway Patrol, along with the Lee County Sheriff's Office were taking part in the third quarterly wave of Operation P.E.D.S. The operation educates and promotes bicycle and pedestrian safety. Moser along with the officers were handing out lights and other safety materials. (Photo: Andrew West/The News-Press Andrew West/ The News-Press)
The rules of the road — and sidewalks and bike lanes — were promoted and highlighted for bicyclists, pedestrians and motorists in Fort Myers Beach on Wednesday as the Florida Highway Patrol began the third quarterly wave of Operation P.E.D.S

The FHP, along with the Lee County Sheriff's Office, began handing out safety equipment and literature promoting safety as part of the Pedestrian Education and Developing Safety operation.
"We're targeting areas in Lee County where there are problems. Typical areas where there are bike and pedestrian crashes," said Lt. Greg Bueno, a spokesman for the FHP.

Click on the article to see the video.Operation P.E.D.S. promotes bike and pedestrian safety in Fort Myers Beach. Video by Michael Braun. The majority of crashes occurred during the afternoon on Wednesdays, he said. The FHP will continue to conduct this type of pedestrian/bicycle safety detail on a quarterly basis.Bueno said that during 2013, 491 pedestrians and bicyclist were involved in crashes within Lee County. Of those, 355 were injured and 25 lost their lives. The purpose of Wednesday's detail was to decrease the amount of injuries and deaths through a series of highly concentrated education and enforcement details in areas prone to pedestrian and bicyclist involved crashes "So far in 2014 we've had 11 combined deaths. We're doing better," Bueno said. "We do this quarterly. We'll target Lehigh Acres in December." 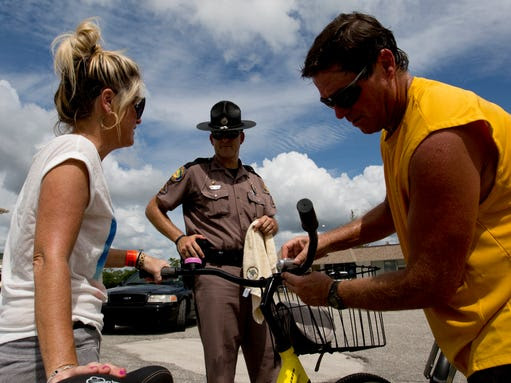 Dan Moser, right , an EMS injury prevention outreach worker for pedestrians and bikers attaches a light to Fort Myers Beach resident Shannon Korvanen's bike with the help of Florida Highway Patrol trooper, John Schultz, center, Fort Myers Beach Wednesday 9/24/2014. The Florida Highway Patrol, along with the Lee County Sheriff’s Office were taking part in the third quarterly wave of Operation P.E.D.S. The operation educates and promotes bicycle and pedestrian safety. Moser along with the officers were handing out lights and other safety materials.(Photo: Andrew West/The News-Press, Andrew West/ The News-Press)

During the operation on Wednesday, FHP and LCSO officers fanned out along Estero Boulevard stopping bicyclists and pedestrians to distribute safety gear such as bike lights and bells, backpacks, reflector bracelets and literature.

"This is my lucky day," Carickhoff said. "I like getting something instead of having to pay."
Leffin lauded Carickhoff's riding capabilities as well as his safety acumen. "You're being safe, riding with the traffic," he said.

More than a dozen pedestrians and bicyclists stopped to listen to officers and accept safety items soon after the operation began around 1 p.m.

Dan Moser, a Lee County EMS and traffic safety consultant, rode his bicycle and handed out 15 bike lights and bike safety literature to help during the event.

"I love this. I look to make sure its not heavy-handed and have found it to be fair and pretty even-handed," Moser said of the FHP-LCSO effort. 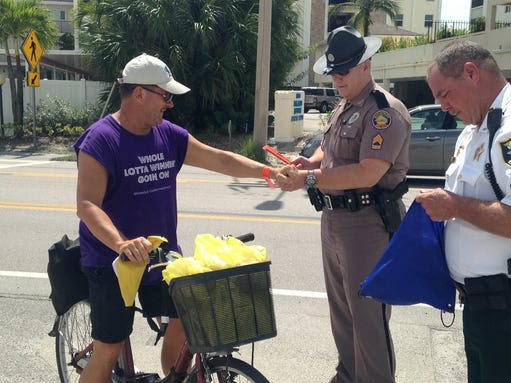 Others who got the full safety treatment said they make an effort to ensure their own safety while riding.

"I'm always safe," said Will Hadden, a beach resident. " ... In Florida, many people don't know that bicyclists have to abide by vehicle laws."

Safety Tips for Pedestrians
•Use Designated Walking Areas Whenever Possible Walk on sidewalks and in crosswalks whenever possible. Pay attention to walk signals and keep a safe distance when standing on street corners.

•Be Sure to Be Seen Be careful of blind spots when walking near or around a vehicle. Assume the driver does not see you.

•Proceed with Caution when crossing intersections and streets.

•Stand Out Wear bright or reflective clothing, especially when walking in the dark. Carry a flashlight, too, for added protection.

•Look Out for Wide Loads Keep your distance when walking around large trucks carrying wide loads because the driver may not see you.

Sharing the Roadway as a Vehicle:
• Every driver of a vehicle shall exercise due care to avoid colliding with any pedestrian or bicycle.

• The driver of a vehicle at an intersection that has a traffic control signal shall stop at the marked stop line or if none before entering crosswalk.