Looking for a place to ride in Cape Coral? Your choices are good and getting better all the time – thanks to the commitment of a core of concerned citizens to turn the Cape into a bicyclist’s dream.
The citizens are the many members of Cape Coral Bike-Ped (CCPD), which formed less than a year ago to promote safer bike-ped options in the county’s largest city. The strategy is to connect existing bike-ped paths – bike lanes, sidewalks, low-traffic streets – into a more effective network by spending infrastructure dollars in partnership with city government and other entities.


And the result? A stellar show of support for its initial efforts, the beginnings of a mapped and branded bike-ped network and, eventually, a network of more than 90 miles of connected cycling routes throughout the city. 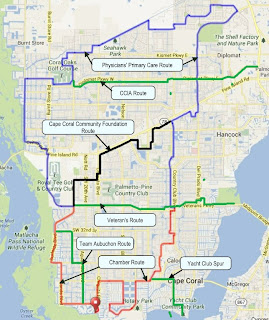 But those ready to ride today don’t have to wait. Head to this link to find myriad maps showing current planned routes that ring the city – complete with distances, directions, and more. Routes can run from less than 3 miles up to 50 miles, giving every level of rider a reasonable option.
Impressed? Wait until you see the roster of sponsors CCBP has put together to support this growing network with signage to show the way and donations to help the city complete crucial connections that will make this network even more effective. They include:

Each has taken on the task of raising funds to make one of these routes a reality, to assist the city in making the necessary network connections to build this citywide circuit and turn the Cape into a cycling destination. Signage to designate the various routes and the specific route detail are being worked on, so stay tuned for updates on construction details. All the routes tie together (eventually), and of course will link up with existing county bike infrastructure to really complete the cycling connection.

It’s a lesson we’re seeing more and more communities learn: Bike-ped infrastructure gets more use when it gets people from Point A to Point B (and beyond) safely and surely… and that seeing people out biking and walking inspires others to join them, building momentum and awareness.

To get this far this fast takes strong community support, true. But it also takes a few dedicated individuals making this there mission – and CCBP has been fortunate to find just that in group founder Carolyn Conant and a handful of Cape citizens such as Mike Swanson, the coordinator responsible for creating the various routes, who saw a need, identified a solution and worked with the city and the community to make it happen.


Happen it did – and bicyclists throughout Southwest Florida can be thankful for that.