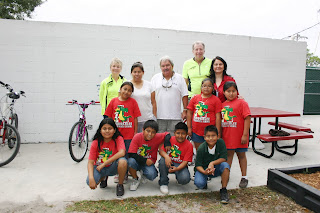 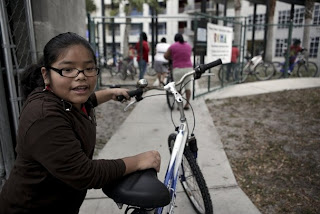 Mauro Miranda reached a hand across a flatbed deck full of bicycles on Friday morning.

"I'm going to get a bike," the 9-year-old said, rubbing his hands together with glee.

Mauro was one of 20 Immokalee Community School students who received an early Christmas gift — spruced up bicycles from the Sanibel Bicycle Club. Mauro plans to use his green, Next Shocker 2G mountain bike to ride to the park and ride with his father to the store, he said.

This is the fifth year the Sanibel Bicycle Club teamed up with Billy's Rentals, a bicycle rental business on Sanibel, to organize a used and refurbished bicycle donation for Immokalee residents. And for the past three years the majority of the bicycles have been given to students of the charter school, 123 N. Fourth St., which serves children of migrant farmworkers and other low-income families.

"This is always exciting," said Gloria Padilla, a coordinator for RCMA's Naples, Immokalee and Bonita Springs area. "It means a lot to them."

She explained that many of the students have no idea their parents are struggling to make a living, especially with the sluggish economy. The school selected the neediest families to be recipients of the bicycles, Padilla said.

"It's sad," Rivas, a farmworker, said in Spanish. "I told my children that there was no money for Christmas presents."

"I'm happy, because my kids will be happy that they have a bike," said Rivas, who received two bicycles.

The group distributed 20 bikes at the school. The other 20 were evenly donated to Our Lady of Guadalupe Catholic Church and the Immokalee community.

The bicycle giveaway is a nice way to give back to the community, said Billy's Rentals' owner Billy Kirkland. His business provides everything from inner tubes and tires to seats.

"When I was a young kid I was a recipient like these kids, and now with my business it allows me to give back," Kirkland said. "Let's face it, what are the holidays for? It's not for you and I. It's for the kids."

In Immokalee, many of the residents use bikes as their primary mode of transportation.

"I call that one," Sonia Domingo, 10, yelled while waiting for the bicycles to be unloaded from the truck.

The Immokalee Community School fourth grader selected bikes for her brother and father rather than for herself. She plans to give her father an orange, aluminum frame Caloi mountain bike for the holidays.

Carol Lugo carefully selected two bikes for her 10-year-old twin sons, Jimmy and Daniel. Now, Lugo's sons will be able to ride their bicycles to school rather than walk.