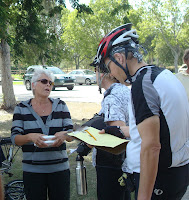 Survey analysis
This survey was conducted as part of BikeWalkLee's public outreach event at Lakes Park in Fort Myers on Nov. 8, 2009. A total of 176 participants responded to the survey.
What do you do the most? Driving led for almost 65% of the respondents, followed by biking and walking/running.
If you could change that, what would you like to do more? Biking came out on top for 62% of those responding, followed by walk/run and then driving.
Asked to pick their top three suggestions to improve transportation options in Lee County, respondents ranked their choices in the following order:
1. More bike/walk facilities
2. More mass transit choices
3. Better connections between existing bile/walk facilities
4. Better enforcement of existing laws
5. More consideration and planning for the needs of all users of Lee County streets.
6. More promotion of biking/walking/mass transit as an alternative to driving.
7. More laws protecting bikers, walkers and mass transit users.
8. Better coordination between governmental entities on bike/walk issues.
Do you feel safe? Participants were asked about their feeling of safety for biking, walking and taking mass transit. The intent of this question was to identify the overall feeling of safety in Lee County locations versus safety in specific locations.
Biking: 48% of respondents said they felt "safe" or "very safe," while 51.2% said they did not feel safe or would not bike.
Walking: 68% said they felt "very safe" or "safe," while 32% said they did not feel safe or won't do it.
Mass transit: 51% said they felt "very safe" or "safe," while 39% said they did not feel safe or they wouldn’t use it.
Asked to rank why they like to bike or walk, the answers were:
1. Good for my health
2. Good method of transportation
3. Good for the environment
4. Good for my budget
5. Good for the community
When asked if they would support additional public investment in bile/walk/transit facilities in the county, almost everyone said yes. However, participants were nearly evenly split between whether spending was "desperately needed" and "be selective how it is spent." Participants were then asked how much more they would pay annually in taxes to support more biking/walking/transit facilities: Almost a third said $50 or more ― the highest figure offered ― while 20.7% said "$10-$20" and 16.7% said "$1-$10." This indicates that the majority of respondents would be in support of additional facilities, and that many are willing to pay for those facilities if necessary.
When asked what was the best place for biking or walking in Lee County, the most common responses were: Lakes Park, Sanibel, the linear park along the Ten Mile Canal, and some of the quieter roads east of town.
When asked what was the worst place for biking or walking, the list was a little more diverse...but U.S. 41 and the Sanibel tollbooth were frequently mentioned. Some cast a wider net, saying that all of the county's or the city's streets were unsafe; others singled out downtown or Palm Beach Boulevard (no room), area bridges (too much litter and glass) or Alico and Corkscrew Roads (too many dump trucks).
What was the most important thing that needs to be done in the next year? Most often mentioned:
• Extend the Summerlin Road path from McGregor Blvd. through the toll booths.
• Connect existing bike paths.
• Build more bile/walk facilities.
• Improve public education on how bikers/walkers and drivers cans share the road (and elsewhere) more safely.
• Ensure new roadways have adequate bike/walk infrastructure from design forward.
BikeWalkLee is a community coalition raising public awareness and advocating for complete streets in Lee County—streets that are designed, built, operated and maintained for safe and convenient travel for all users: pedestrians, bicyclists, motorists, and transit riders of all ages and abilities. Information, reports, statistics and background available online at www.BikeWalkLee.org
BikeWalkLee would like to thank the Center for Public and Social Policy at Florida Gulf Coast University for providing data entry support.
FINE PRINT: This survey has several limitations. First, participants were asked to participate as they biked, walked, or otherwise enjoyed the amenities at Lakes Park. One might conclude that this group has a favorable predisposition to support biking and walking; but not necessarily transit. In addition, the survey was delivered to participants in the form of a paper copy, which often introduces error. For example, respondents did not consistently follow the question instructions, particularly those questions that required ranking. Regardless, the survey provides important feedback regarding how this group, who is inclined to support biking and walking, feels about the biking, walking, and transit environment, priorities, funding and improvements needed in Lee County.
Posted by Darla at 12/15/2009 05:31:00 PM