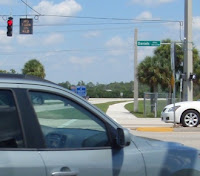 FORT MYERS, FL — Lee County is among the most dangerous communities in the nation for pedestrians, ranking 23rd out of all 360 metro areas in the nation, a new report shows.

The report, "Dangerous by Design: Solving the Epidemic of Preventable Pedestrian Deaths (and Making Great Neighborhoods)," ranks America’s major metropolitan areas and states according to a Pedestrian Danger Index (PDI) that assesses how safe they are for walking. An update of the 2004 "Mean Streets" report, "Dangerous by Design" was released by Transportation for America (T4America.org) and the Surface Transportation Policy Partnership (STPP).

The report notes that most pedestrian deaths are preventable, because they occur on streets that are designed to encourage speeding traffic and lack safe sidewalks, crosswalks, pedestrian signals and other protections. Fixing these problems is a matter of will on the part of state departments of transportation and local communities, and of shifting spending priorities, the report concludes.

"Dangerous by Design" also examined how states and localities are spending federal money that could be used to make the most dangerous streets safer, and found that Lee County spends only $1.12 per person ― far below the national average of $1.63 per person or the statewide average of $1.41 per person.